Recently a client of our parent company Midgard IT, purchased a new building to move their offices into. The building was bare bones inside, and we were tasked with installing the internal network for there IT set-up. 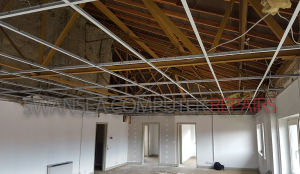 Excellent. Time to get this moving. We had been given just a week from order to completion. So after finalising the layout with them, and working out where all the points were to go. We set up a network plan and ordered the cables….all 12 huge boxes of Cat6 cables!

And it works! just a few days of hard labour and our IT Tec’s were able to completely wire up the network for the new building.

Book a Computer Drop off, or ask for help or advice today

To Book a Computer Drop off

To book a computer to be dropped off at our workshop for our onsite Engineers to diagnose, or repair, please contact us for a online check, and then arrange a PC Drop off below.